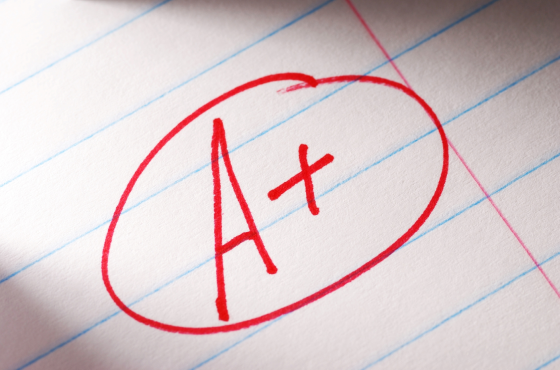 The result is in with the first month of trading the reference account using Big-Game Hunter ES at Striker. There are quite a number of things I learned over the month about the service. It is a good thing that I am trading real money with Striker myself so that I can further refine the trading strategies I planned to offer through them. Let’s go through the results and discoveries one by one.

First, the month has a net loss of $2820.80 all fees included. So it is down 18.8% for the month. It is not an outlier comparing to historical performance. So on the surface it is a typical month for Big-Game Hunter ES. This being said, I will add a monthly return table in the Big-Game Hunter ES page so that it is easier for traders without prior experience in this type of trading to see how the equity fluctuates.

Here is a chart capturing all the trades for the month. 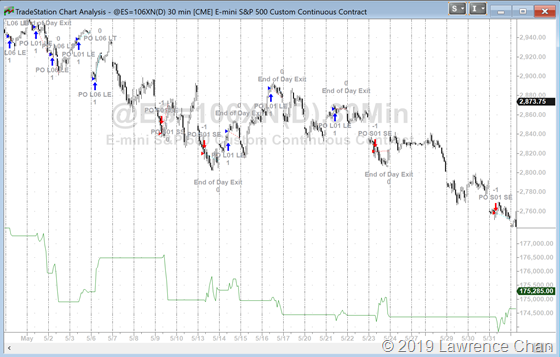 What is more interesting, however, is that if you know what happened during the month, you would notice that quite a few of the trades taken were stopped out because of news shock caused by Trump making tweets suddenly in the afternoon. Although I cannot tell for sure that these trades would have worked out fine without those news shocks, I know it is not likely that they all experience the worst case scenario either. So, it is something worth monitoring to see if such events continue to interfere with the performance. If so, better protection scheme has to be deployed using higher resolution data.

Another observation is that on days that the disruption of price movement caused by POTUS all resumed the original path the next trading day. It is as if whatever he did, only affected the day trading crowd.

Since I am trading the strategy on Tradestation myself and also through Striker, I get to compare the fills of the trades to see if there is any issue with Striker’s automation. Here is a table of the trades taken and a comparison of the actual fills. 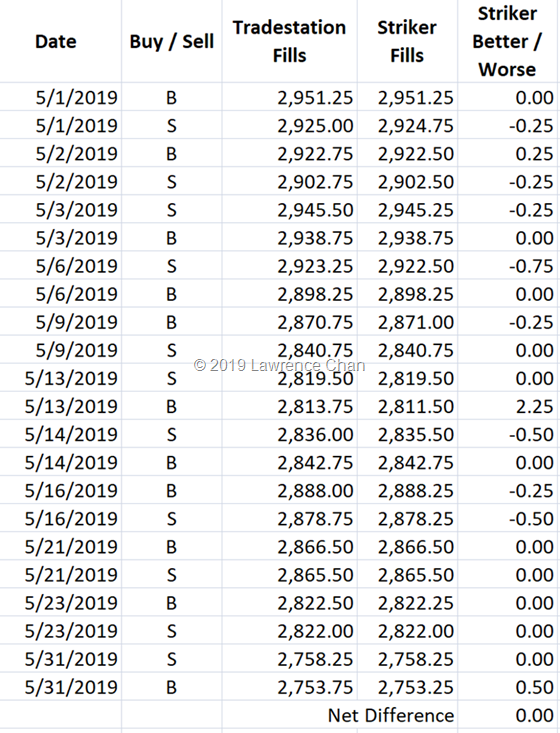 From the one month experience, it looks like there is a consistent slippage against the strategy with fills at Striker. However, the actual net effect of the trades were magically at zero thanks to one of the outlier better fill of 2+ points. I really don’t know what to say about this until I get more data to analyze. Let’s say I am just glad that the result so far is comparable.

I could not write up this post last weekend because I do not have a good way to capture the daily statements with the reference account. I ended up doing this manually. Without automation this will be very hard to do going forward as I planned to release more trading strategies with Striker. For now I guess I have no choice.

On my own account, given the chaos that is expected during the coming few weeks, I decided to delay the increase of contracts until next month. Hopefully POTUS will be done with his trigger happy tweets by then. I am not worry about Big-Game Hunter ES not going to perform though. I am going to deploy another set of trading strategies with my account soon, it is better I keep things as is so that I can compare the results more easily.

Have a good one!